Thank you to the 182 people that provided valuable feedback via the user survey I had running over the last 30 days on the randymajors.org map and search tools.

This post provides a brief summary of the feedback, as well as a handful of enhancement ideas that came from the surveys.

First, what are people using the tools for? 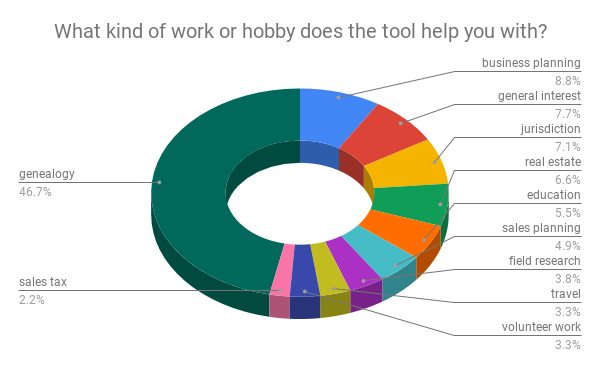 Given the history of this website, it’s no surprise that the largest proportion of users use the tool for genealogy purposes, especially the Historical U.S. County Boundary Maps and AncestorSearch: Google Custom Search tools.

Another question asked how often people use the tool: 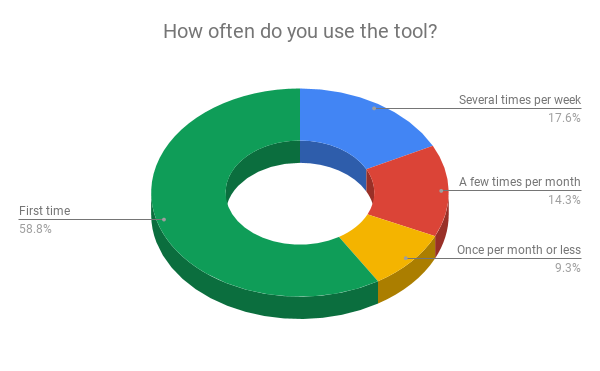 Another sign of user engagement could be gleaned from the question asking how long users typically spend using the tool: 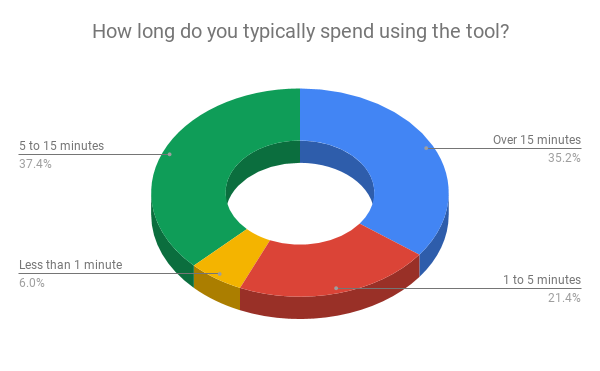 35% of people use the tool(s) for over 15 minutes per visit to the website, and 37% use them for 5 to 15 minutes per visit.  Only 6% of respondents typically use the tools for less than 1 minute per visit.  I was very happy to see these engagement numbers, as the average “time on site” according to many sources is 2 to 3 minutes.  Those same industry average surveys show that only 20% of websites have average visit times of over 5 minutes, and only 3-4% of sites have visit times of over 15 minutes.  So apparently, you’re finding the tools to be quite useful!

The final question I asked was “Overall, how satisfied are you with the tool?”  I was very pleased and humbled to see that by far the vast majority of users gave it a 10 score of “Extremely satisfied” or close to it:

I also asked an open ended question about ideas for improvements to the tools.

One idea that came up several times was the ability to show townships and township/range/section.   As a result of that idea, I’ve added both townships to several tools and created a new Township Range on Google Maps tool, discussed here.

Another idea that came up several times was to make the map window larger.  Since hearing that feedback, I’ve enlarged the maps considerably.  First, the map tool pages on the website now occupy the full width of your screen (the higher your screen resolution, the more you’ll see).  I’ve also increased the height of the map to go to the bottom of your screen view, which for higher resolution screens, this nearly doubled the height of the map.  Finally, I added an “☐ expand” button in the upper right of most map tools to fully enlarge the map window to your screen width.

The final idea that was mentioned more than once was the ability to show your current location.  I’ve added that functionality to most of the maps as well:  just click the “⊕ Locate” button in the upper right of the map.  (I wrote about these last two enhancements here.). As a shortcut, you can also see your current county and answer “What county am I in?” here: www.what-county-am-i-in.com

Well, that concludes the user survey and summary of the feedback from it.  But you can always provide feedback via the “Help improve this tool” link found at the bottom of each tool’s page, or you can provide feedback directly only to me by using the “Get in touch with Randy Majors” form found on the bottom right of every page on the website.

Thank you again for the excellent feedback, and I hope to keep improving the tools and adding new ones in the future as well!